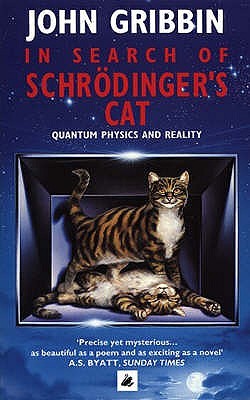 With a world of now quantum computers, LED’s, post-modern parallels and a television series focused around strands of theoretical physics called The Big Bang Theory, I was vaguely aware of an area of physics that seemed to be intertwined with our lives that I really had no knowledge about. Having abandoned physics with the realms of magnetism, gravity and mass vs. weight at school, I had in my secondary education favoured the more readily accessible and easily applicable worlds of biology, chemistry and psychology. Picking up In Search of Schrödinger’s Cat in a local Oxfam a while ago, I was intrigued by the prospect of learning about quantum physics, albeit at an elementary level, and putting relatively recent discoveries regarding Higgs-boson particles into greater perspective. Perhaps my first fear of reading John Gribbin’s account of the quantum world, was that it would be far too involved and complex, beyond a non-scientific comprehension of physics I had. And I was therefore pleasantly surprised to find that the first half of In Search of Schrödinger’s Cat began with a refreshment of physics right up to the level at which I studied my once favoured biology and chemistry. Taking the earliest accounts of the quantum way of thinking into account, John Gribbin begins with a foundation of classical physics that rapidly dissolves into the abyss of the quantum.

The first half of Gribbin’s work starts with the denial of classical physics as a viable and holistic explanation of the world as we can observe. From the father of classical physics Sir Isaac Newton and his Principia, devising the laws of motion and universal gravitation, Gribbin clarifies the distinction between wave and particle theories of how electrons, photons move and interact with their environment. But from here, the investigation takes a deeper level, exploring the wave-particle duality theory that postulates that particles can behave both as waves and particles, leading us to (at this point) a rather confused arrival at quantum physics. Rather than solely focusing on the scientific theories of quantum mechanics and physics, Gribbin formulates his explanation with the interactions between key physicists and mathematicians that lead to the development of a quantum view of the universe. His book quickly debunks the convenient Rutherford-Bohr model (1913) of an atom, which became known later as Bohr’s atom, and is characterised in modern text books as a central nucleus surrounded by negatively charged electron rings. Much to my horror leaving behind my memory of a “secondary school atom”, Gribbin carefully leads us through conversations between Heisenberg and his uncertainty principle, Planck and his constant that governs the relationship between energy and frequency, and the Niels Bohr atom that together formed the centre of what became known as the Copenhagen Interpretation.  Along with other physicists including: Wolfgang Pauli, German mathematician and physicist Max Born, first British quantum physicist Paul Dirac and of course Albert Einstein; the short period between 1923 – 1927 saw the first relatively complete view of Quantum physics being founded, but at this stage its meaning and derivations of this theoretical melting pot were far from exhausted. 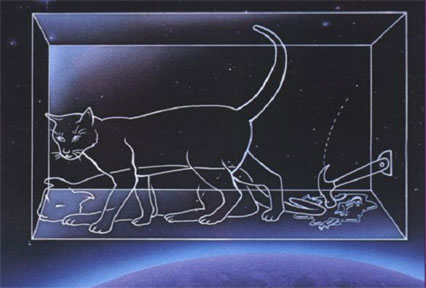 Over half way into In Search of Schrödinger’s Cat, I had yet to reach an explanation of Erwin Schrödinger’s famous paradox, involving a Geiger counter, a radioactive particle, a vile of poison and a dead and/or alive cat. Whilst heavy reading in places, Gribbin purposefully used the first half of this publication to lay down an essential foundation of quantum physics ahead of the more applicable and intriguing paradoxes and interpretations of the world that would inevitably come. I have to admit I’m glad of this, and moving into the second half of In Search of Schrödinger’s Cat, I enjoyed thinking about paradoxes of the quantum world, including even a theory of time travel, all the more. This in my opinion made Gribbin’s work far more accessible even though I had just an elementary knowledge of physics beforehand.  The transition was made far easier taking into account the uncertainty principles already outlined, and the in between/ simultaneous nature of particles to grander leagues of theoretical thought.

If I were to provide an analogy of the book at this stage, I would use the graph of an exponentially increasing curve, quickly sections discussing the nature of nanoscopic particles zoomed outward to the world around us, permeating through all fields of science and even areas of the social sciences. Here implications resonated far more strongly with me, and helped solidify the information I had so far learnt, taking quantum physics beyond “science” to what we frequently cite as post-modernism in the broadest sense of the term. Gribbin paints a fascinating picture of the future, which bearing in mind publication in 1985, I found quite extraordinary. 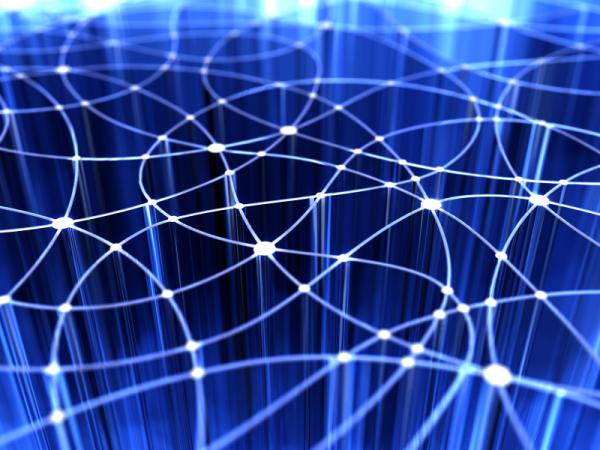 Moving into the latter chapters of Gribbin’s work, we hear a theory of quantum physics that once again takes the concept of the quantum to a further level. I won’t spill the details here… but the more recent interpretations of the quantum universe, feel much more at home with our understanding of science-fiction than in the publication of school text books. And given these theories, I’ve been encouraged to read further into the details discussed between Max Born and Einstein, and other significant publications that formed the makeup of our current quantum understanding. One major criticism I had of In Search of Schrödinger’s Cat was how Gribbin so easily accepted the Big Bang Theory of the universe origin as fact, and as a rather generalised precursor to the development of classical and then quantum physics. Given the relative precision that we tackled quantum physics with, I felt it a considerable oversight to consider the Big Bang theory as fact, when we’re dealing with a high degree of uncertainty in a quantum explanation of the universe. This might be a personal bug-bear I have around this theory of the origin of the universe, yet still it didn’t sit naturally with the succinct format I was presented with for quantum theory.

Given the short nature of the book review on such a large subject, I’ve tried to keep details of the findings and arguments made to a minimum, and please accept my apologies if you were expecting a further and more precise outline of what quantum physic is, but I can honestly recommend In Search of Schrödinger’s Cat as one the most profound works I’ve read in a long while. I cannot claim I’m now proficient with quantum theories, but Gribbin’s outline was both logical and enjoyable, and served less as an education than as an illumination of the subject. Taking into account the developments from Newton, to Bohr to Einstein and others, the quantum world is a current a conversation as ever, and understanding the beautiful complexity of this world’s order and theories that contribute, takes the significance well beyond the contemplation of Schrödinger’s Cat.

This article was written by Magnus, from www.londonosophy.com. A site dedicated to reviews of London cultural events, books and independent films.

If you have not found what you are looking for try searching on our more detailed site at www.usedbooksearch.net